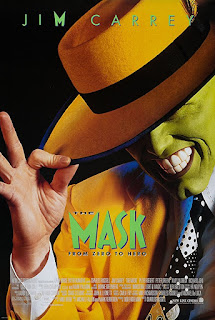 The Mask (1994)
PG-13 | 1h 41min | Comedy, Fantasy | 29 July 1994 (USA)
Director: Chuck Russell (as Charles Russell)
Writers: Michael Fallon (story), Mark Verheiden (story)
Stars: Jim Carrey, Cameron Diaz, Peter Riegert
Story:
Stanley Ipkiss (Jim Carrey) is a bank clerk that is an incredibly nice man. Unfortunately, he is too nice for his own good and is a pushover when it comes to confrontations. After one of the worst days of his life, he finds a mask that depicts Loki, the Norse night god of mischief. Now, when he puts it on, he becomes his inner, self: a cartoon romantic wild man. However, a small time crime boss, Dorian Tyrel (Peter Greene), comes across this character dubbed “The Mask” by the media. After Ipkiss’s alter ego indirectly kills his friend in crime, Tyrel now wants this green-faced goon destroyed.